Ask and you shall receive!  Did you know Ben and Jerry’s received a petition with over 23K signatures to create a non dairy ice cream line?  Well they did, and I was lucky enough to visit their headquarters in Vermont this past week to find out the scoop! 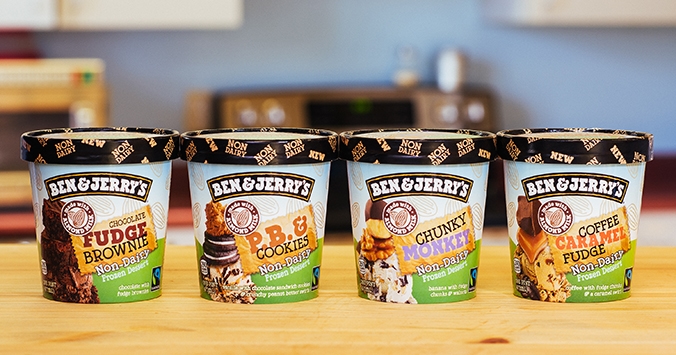 There are 4 non dairy flavors in the line so far.

Not only were we able to sample all the flavors, but we also got to develop our own ice cream flavor in their test kitchen!  More on that later in the post.

I love these trips because it gives me the chance to connect with some other bloggers.  I met Becky from Glue and Glitter, Janne from Sweet Potato Soul, Cadry from Cadry’s Kitchen, Rika and Doni from Vegan Miam, Madeline from A Graduated Kitchen, Hannah from Bittersweet, and Carlo and Carmella from The Food Duo. Please check out their blogs if you get a chance.  Very talented and nice people. 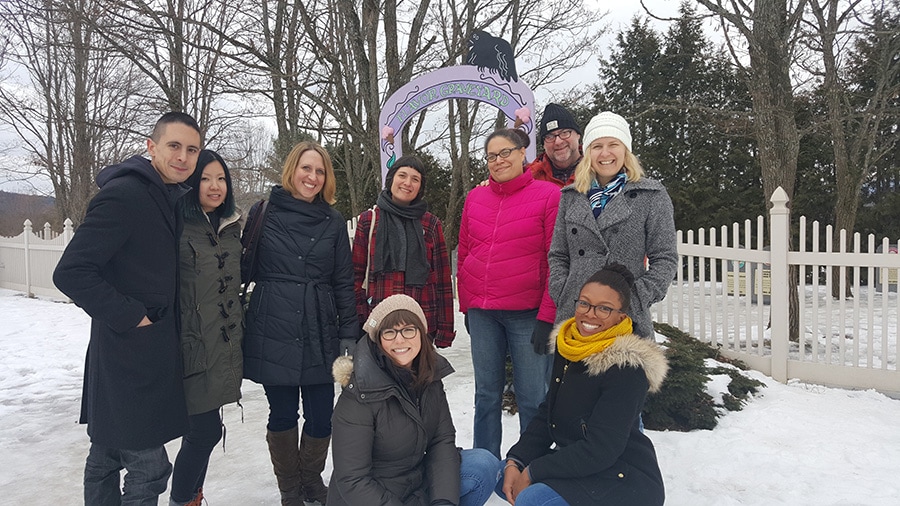 As you can see it was very cold.  I am so not used to that anymore!  Haha.

I want to thank the staff at Ben and Jerry’s for their amazing hospitality.  Not only did they put us up in the fabulous Hotel Vermont, but they also lined up some amazing vegan food.  The way they spoke about the company, showed the amazing pride they have.  Ben and Jerry’s is a pretty awesome company to work for. 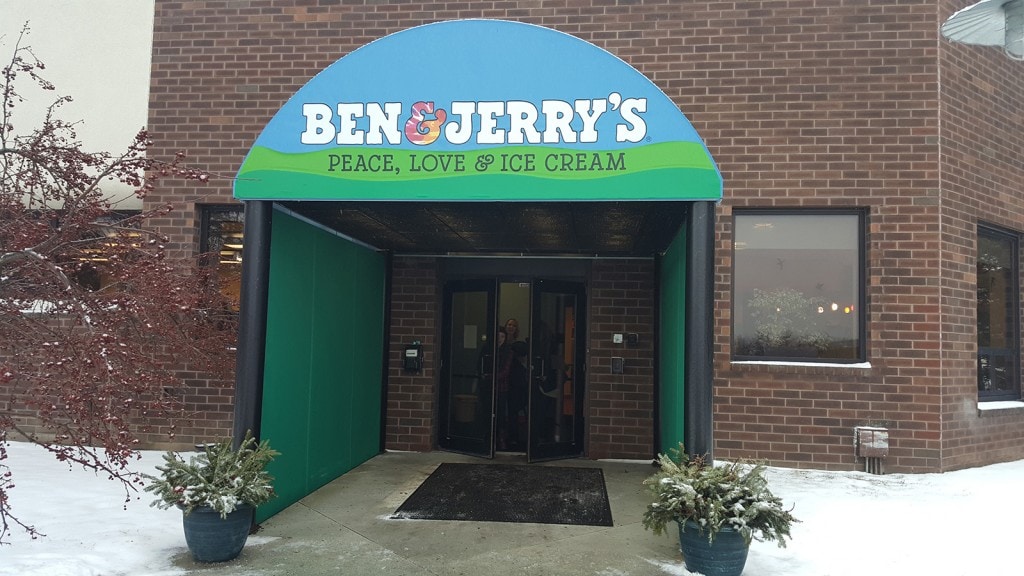 Some random facts about Ben and Jerry’s:

They also take pride in the companies they deal with.  One of those companies is Greyston Bakery, the company that makes the brownies for the chocolate brownie ice cream and the non dairy chocolate brownie frozen dessert.  They have an open hiring policy, which can provide jobs to those without experience, despite having past history of drug dealing and incarceration.  We had the pleasure of hearing one of their employees speak about his transformation thanks to the company.  You can read more about their mission here.  They are also partnering with Whole Foods to make a vegan brownie available in all their stores by April of this year.  Yay!

PB & Cookies:  This was absolute fave!  It’s a vanilla base with big chunks of sandwich cookies and swirls of peanut butter.  Definitely shines as what Ben and Jerry’s is best known for.

Coffee Caramel:  I loved this one as well.  Rich coffee flavor with chocolate chunks and caramel.  Who doesn’t like caramel and coffee together?

Chunky Monkey: I was never a fan of this flavor when I ate the regular ice cream, so it was not my fave.  I am not saying it wasn’t good, I am just saying I am not a fan of a super strong banana flavor in my ice cream.

Chocolate Brownie: I LOVED the chocolate brownie chunks in this.  Those bites were very rich, but the ice cream itself was lacking something for me.  Maybe it was a certain mouth feel?  Not terrible, just not my fave.

One of the cool things we did there, was create our own vegan ice cream flavor in their test kitchen!  We broke into teams, created the flavor, created a marketing poster, and pitched our idea to the marketing team!  It was really fun. My team spotted a locally source peach bourbon jam in their kitchen, and we based an ice cream around it.  The ingredients we used were, vegan vanilla milk base, peach bourbon jam, roasted pecans, cinnamon and caramel. This is ours pictured below.  Look at all that caramel goodness! 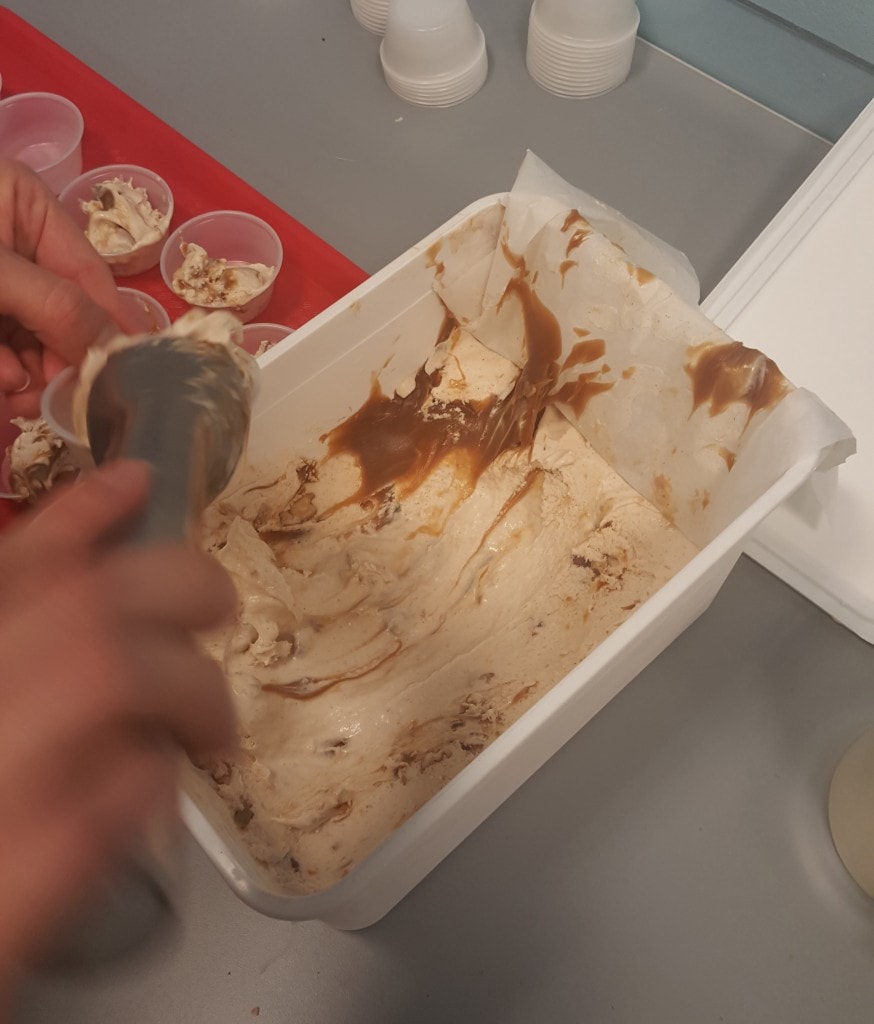 It was so delicious! I am going to have to re-create it at home for you guys to try. 🙂  The marketing department voted on the best flavor, and our team won!  So cool.

Lastly, one of the things I wanted to mention was that Ben and Jerry’s is very focused on sustainability.  In fact, they tax themselves $10 for every ton of carbon they omit.  They use that money to help sustainability in other areas. They made no point to hide the fact that their dairy line is a HUGE impact on the size of their carbon foot print.  They have a goal to reduce their carbon foot print by 80% and part of that plan includes making MORE plant based ice cream and LESS dairy ice cream.  So supporting the plant based ice cream line can really help. I am sure they are already drumming up new flavors now.  As always, they listen to your suggestions, so don’t hesitate to email them with requests.  🙂  There is actually a form on their website for flavor suggestions.  You can check it out here.

Disclaimer: I was provided a free trip to Vermont from Ben and Jerry’s.  All opinions are my own.  The end.